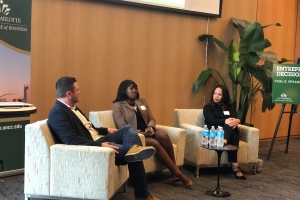 I never thought I could become an entrepreneur. Not that I wouldn’t want to – I’ve certainly daydreamed of owning my own business and enjoying the associated benefits: working for myself, setting my own hours, pursuing my passion, etc. However, those daydreams are quickly shut down by my more logical side that questions if I have what it takes to do something so difficult. Am I smart enough to develop the next big idea? Am I savvy enough to make all the right business moves? Am I confident enough in myself to never falter?

After attending the Entrepreneurial Decisions lecture on Oct. 24, I realized I have been asking myself the wrong questions. The first entrepreneur to speak was Bryan Delaney with Skookum. He kicked off by painting a picture of a successful company: Skookum has won multiple awards for best place to work in Charlotte, has an incredible company culture (of “good people doing work they are proud of with people they enjoy being around”), and has grown tremendously in revenue over the years.

Bryan then opened up about the company’s early days, when he and his business partner struggled to make payroll and balanced expenses between multiple credit cards. He said something that struck me: that building his own business felt like “jumping off the proverbial cliff and figuring out how to build a plane on the way down.” This wasn’t the story of someone who had every detail planned out and made all the right business decisions. In fact, as a graduate student and full-time employee often figuring out life as I go, his struggle sounded similar to my own.

Vanessa Vaughn from Asfalis followed Bryan’s presentation. Vanessa began her consulting company with a traumatic experience and an idea: that trauma can be a gateway to triumph. She decided to leave corporate America and pursue this idea despite her lack of funds. In discussing the rise of Asfalis, Vanessa said, “People talk a lot about the great things, but they don’t always talk about the struggle.” Despite having a great idea and a business strategy, she dipped into her 401k and worked long hours to make her business successful. I once again felt as though this story echoed my own, as a graduate student who sometimes struggles and sacrifices to find success.

Finally, Ticora Davis from the Creator’s Law Firm presented her story. After graduating from law school, she found herself working for a boss who consistently underestimated her. This ignited a fire in her to start her own law firm, working specifically with creative entrepreneurs to help them protect their content. The firm became famous within months, but not without some tough times. Ticora noted moments of feeling mentally overwhelmed. In those moments, her strategy is to “get control of your own mind, find the passion in your belly, know what you want to build and go for it without apology.”

My outlook on entrepreneurship itself didn’t change during this lecture – starting my own business still seems very difficult. However, I realized that the successful entrepreneurs aren’t necessarily the smartest, the most confident, or the most prepared. They are people who have learned how to figure out details as they go, how to struggle and overcome, and how to believe in themselves despite setbacks and feeling overwhelmed. As crazy as it seems, these are the same lessons I am learning. Bryan, Vanessa, and Ticora’s stories helped me realize that if they can do difficult things, maybe I can do difficult things too. 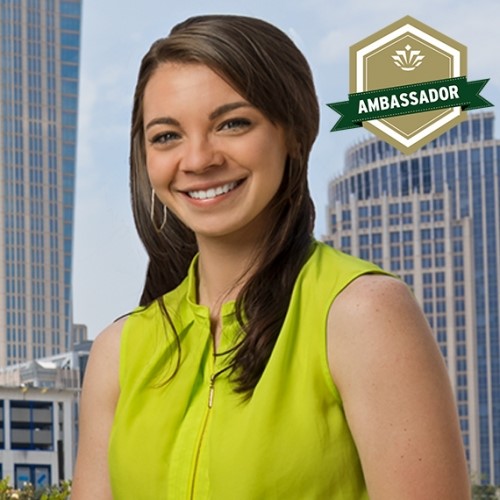 Danielle Avery is pursuing a Master of Science in Mathematical Finance degree. She serves as a Student Ambassador for her graduate program. Learn more about Danielle Avery in her Faces of Belk College profile.