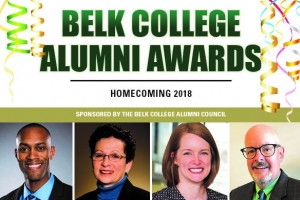 As part of UNC Charlotte’s Homecoming celebration, the Belk College of Business honored four alumni and friends for their accomplishments, service and dedication to the college on Oct. 10.

The UNC Charlotte Belk College Alumni Awards recognize alumni and advocates who have demonstrated leadership and outstanding career achievements and enhanced the mission of the college. Sponsored by the Belk College of Business Alumni Council, the awards were bestowed to four individuals in these categories:

Jill Tietjen (’79 MBA) received the Distinguished Alumni Award. Tietjen is an electrical engineer, consultant, women’s advocate, author and speaker. She is the president and CEO of Technically Speaking, Inc., an electric utilities consulting firm which she founded in Greenwood Village, Colo. in 2000. She has written or co-authored eight books and more than 100 technical papers as well as blog posts for the Huffington Post. As president of the Board of Directors of the National Women's Hall of Fame, Tietjen has worked to gain visibility and grow the impact of the organization.

Distinguished Alumni Service Award recipient Liz Ward (’14 M.S. in Real Estate) serves as the Vice President of Multi-Family Development at the Charlotte-Mecklenburg Housing Partnership, a local non-profit organized to provide affordable housing and economic development within stable neighborhoods for low and moderate-income families.  Her career began in a leadership development program at Wachovia Bank focusing on financial reporting. She then spent six years in commercial real estate lending at Wells Fargo focusing on construction loans for multifamily, retail, office and industrial in the Charlotte market. She serves on the Real Estate Alumni Association board.

Distinguished Young Alumni Award recipient Christopher Moxley (’03 International Business) is a Senior Compliance Associate at TIAA, specializing in data privacy and identity theft. He is also co-owner of several businesses, including the award-winning Charlotte-based lifestyle brand, 704 Shop, which he co-founded with two fellow 49er students in the early 2000s. He is also a partner with Five Lions Entertainment, an artist booking and upscale event planning company. Moxley was honored by UNC Charlotte’s Black Alumni Chapter at the 2017 Excellence in Leadership Awards, receiving the Excellence in Entrepreneurship Award.

The Honorary Alumnus Award went to Jim Boylan, who served as the Chief Human Resources Officer for Brighthouse Financial until his retirement in 2017. Prior to his role with Brighthouse, he achieved a 36-year career with MetLife including leadership roles as the vice president of Human Resources, Legal Counsel and Compensation Consultant. In addition to his service on the board of the Augustine Literacy project and UNC Charlotte Athletic Foundation Board of Directors, he also serves on the Belk College of Business Board of Advisors and the Women in Business Initiative Board. In his role as a board member for the Women in Business Initiative, Boylan was instrumental in securing funding for the program. To date, the MetLife Foundation has given $150,000 in support which has provided the funding for workshops, networking events, retreats and speaker opportunities for students.

Dean Steve Ott said the 2018 award winners are stellar business leaders, while also each making a difference in their communities.

“The Belk College is proud to honor these four alumni and friends during UNC Charlotte Homecoming Week,” stated Ott. “The 2018 award winners represent the values of the Belk College – integrity, knowledge, innovation, excellence, diversity and inclusion and global citizenship. These four individuals are leaders in the business community and in their own communities at large. Congratulations to these four leaders among our strong and growing Belk College network of more than 30,000 alumni worldwide.”